I’ve admired landscape architect Claude Cormier’s work for quite some time, ever since I encountered photographs of his Blue Stick Garden, which has been installed in several locations between 1999 and 2009. The use of such simple materials – thin wooden stakes and house paint – are so dramatic, beautiful and effective when combined into a large array with thousands of individual sticks.

I was horsing around and sketching this morning, imagining ways one could recreate the blue stick garden but add a kinetic element in the form of streamers attached to the top of each stick. The streamers could be made from grommeted nursery tape, which would flutter and wave int he wind, creating a soft sound and fluttery ripple. I’d love to give this a try on an abandoned lot in Philadelphia, Apiary Studio’s new home.

Images in this blog post are a sketch I produced as well as images of the Blue Stick Garden from Claude Cormier’s website: 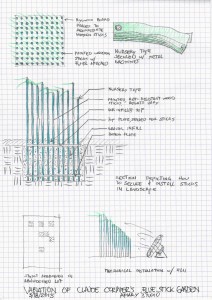